Damn, Excision. This isn’t the first time something has malfunctioned on Excision’s watch. He even said he might be cursed but we still love him. Jeff Excision Abel has been doing EVERYTHING to make things run smoothly. During Destroid, the volcano on the left side caught fire. Destroid literally destroyed the volcano and their set last night. 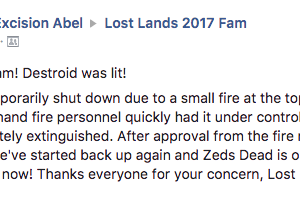 Someone on the Legend Valley grounds, where the venue is held, got a video of the lit volcano. Sets the ambiance though. Thankfully, no one was hurt and everyone on the Lost Lands team has been nothing but informative, professional and kept everyone in a calm matter. This smells like another year of Lost Lands.

Excision is completely proactive with his first festival. He’s been attentive to everyone in attendance. Headbangers even took it upon themselves to keep the festival grounds clean!

With the festival officially sold out, today is the last day to watch the live stream. Excision and his crew were kind enough to let everyone watch the festival from home. With that emerged #CouchLands2017. The trending hashtag emerged and now has over 1000 people supporting them in a 24 hour period. (Shout out to Mallory Bae, Amanda Doyle, Chelsie Puntoni and Justin Lund for making CouchLands a reality and such a loving community!)

You can join their Facebook page and twitter page here. The loving community has been the driving force behind the most LIT live stream I’ve ever seen.  Have a chance to get the best the live stream. Come say hi and be a part of #CouchLands2017.

Tune in tonight for the last night of the live stream! It’s LIT.🔥

The Tragedy of The Las Vegas Shooting