Wake Up and Get A Jump On Lost Lands: 4 Lost Land Tips to keep in mind!

If you’re not in the Facebook groups or just living under a rock, Lost Lands has been selling tickets like crazy. This is going to be like the time EDC Las Vegas officially sold out in 2016 for their 20th anniversary. With a surplus of people purchasing tickets, here are things that are essential so you don’t miss out on Lost Lands.

With the festival at nearly 90% capacity, it’s a ticking time bomb that Lost Lands will sell out. However, here are some things you need to know.

Things you need to know about Lost Lands Tickets

#1 One Car Camping ticket is good for six people.

Yes, you heard it. One camping ticket is good for 6 people. People at Lost Lands knew a problem arose when the camping passes completely sold out.(And they still are.) Many people have spots that they’re selling in their campsite. So bring your ten man tent and make sure to fill up the spots on your site.  So no one is homeless for LostLands. As of now, only certain VIP camping packages are available. Tickets are available here.

Also Check Out: #GetLostWithUs at Lost Lands: We’re Not Ready!

Let’s say camping isn’t your thing. Or even you took a while to get the camping pass. If you didn’t manage to get a camping spot, you always have time to book a hotel in the downtown Columbus area for guaranteed transportation to the festival. Shuttle passes are available for purchase here.

#3 Read The Official Rules and Regulations Before Lost Lands

If you’re asking if something is right to do, you probably shouldn’t do it. I understand, a good turn up lit. But remember, Lost Lands is a new festival. Want it for next year, don’t violate the rules or else it won’t come back next year. Don’t be the reason why it doesn’t come back for round two. Rules and regulations are here.

#4 Look Out For Each Other

Maybe PLUR isn’t dead after all. Remember, if you see someone who needs help, take the time and help. It could be a life or death situation. Also, Hydration is everything and the medic tent isn’t fun when your friends are headbanging without you.

Remember to have fun and see you in Columbus, Ohio, Headbangers!

For more info on Lost Lands, add them on their social streams below! 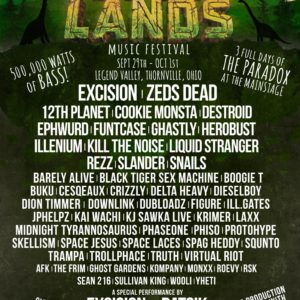 Tickets are available for purchase here