Today was the day I experienced Snowta for the first time. Here is my story. I wake up in a drunken stupor on my friends couch. Saturated in winter jackets, my drunken ass couldn’t find a blanket. Surprisingly, in some way, I made it back to my apartment. That moment, I realized I locked myself out of my room. A perfect way to describe 2016, am I right? As I waited for maintenance , I scroll through my text messages. God, I have some of the best friends in the world. My buddy offered to buy me a ticket to Snowta NYE at the Minneapolis Convention Center. Maybe 2016 wasn’t a complete waste after all?

The hottest EDM venues in Minneapolis is The Exchange and Skyway Theater. This particular event was brand new to the city. This was the beginning of something big. Minneapolis had never thrown an EDM event as big as Snowta. It had been hyped all throughout the Twin Cities. The anticipation for the past month was jarring. I had no idea what to expect.

As they came to my place I couldn’t help but smirk. I felt like a child on a Christmas morning. I couldn’t contain my excitement. The one hour and twenty minute car ride was filled with anticipation.

We arrived at the hotel at 5:30pm. We were pretty buzzed. We’ve been at the hotel for a few hours now. To pass the time, we played a little catch up while having a few drinks. Half of the group rushed to venue. Meanwhile, I stayed in the back with the other half of my friends to prepare for the night. By the time we headed out, it was 7pm. You could already tell I was belligerently happy.

My buddy hooked it me up with VIP tickets. We had instant access to the venue. Unfortunately, the rest of squad was on the GA line. We got checked in super quick. The perks of VIP included: one free drink, a ride down the slide, a ride on the ferris wheel and access to 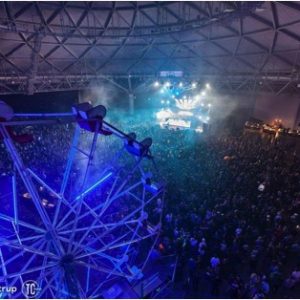 the VIP room. There were so many wide assortment of food including: gyros, pizza, burger, pretzels, etc.

As we are walking, we noticed an array of art vendors near the smoking exit. From live paintings, wire wrappings, pins, you name it, everything was there. My buddy, Del Sol, was there, as a vendor for his art collection. He is all over the map. Once, I took in all of these festivities, I felt at home. The next thing on my list was to figure out, where the music was coming from?

This festival was different because it was indoors. There were so many things to explore. Such as a giant slide and a half pipe with with skateboarders, gritty and all. Alongside were Red Bull stands and multiple mini bars. I ended up discovering Lucy Luxe and Velvo, Waka Flocka Made an appearance as well! 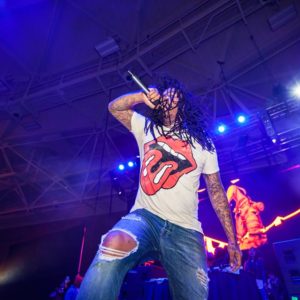 Snowta Stage
I was in dire need of a cigarette. I walked toward the back and I saw big bronze letters. It read First Avenue. Underneath the doorway, there were signs that said “smoking are but I heard music to the left of me. I walk through the door to see giant lit up letters saying Snowta with a ferris wheel in the background. The night had become surreal. I was here. This was happening. I was stoked!
The Pyramid Stage 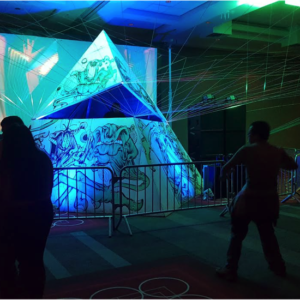 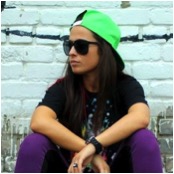 Jordan Osten aka Lucy Luxe was the first show I attended at Snowta. She was mixing trap songs and it grabbed my attention. Plymouth native, Luxe’s style is a mixture  of trap, electro, and dubstep. I honestly hadn’t seen a show of hers. I’m glad I found my way to Minnesota’s Queen of Electro-Trap. Osten is known for Play Me Records, Dirty Talk female due. In 2013, she got recognition for her mix to “Pop That.” She was my first impression of what Snowta was going to be like.

Beyond his homestate, Velvo has energized the biggest clubs in the midwest thru opening and supporting slots for some of the biggest names in dance music. Fresh off the back of a productive 2016 Velvo looks to have a break out year in 2017 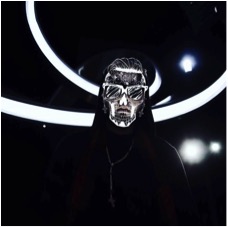 The Grey Duck had a different vibe! Not a bad one but a good one. I got my head bang on at this show. BPM’s were high and so were the rest of my peers. Matter of fact, I had gotten my New Year’s kiss four hours early by this girl. She used too much tongue. By the end of the show, I had needed to relax and grab a few more drinks. 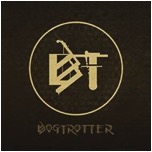 After dancing to exhaustion, I waltzed into BogTroTTer. EVERYTHING from the people, the music and the vibes was unreal. Curtis Czock, as known as BogTroTTeR is from Minneapolis, MN. He is classified as Experimental, Dubstep, Glitch, Downtempo, Electronic. BogTroTTeris signed to Shanti Planti, Additech Records. It was perfection. Ambience of drips and drops splashed throughout the room. As people swayed back and forth, It was nice to dance slow tempo music. A breather was needed and it was definitely provided!

They say fifth time’s charm right? I’ve seen Big Gigantic twice at Summerset, at Okeechobee, Skyway and here at Snowta. Big Gigantic’s fusion of the drums and saxophone is genius. Their live performance was the right way to begin 2017. What more could you want? 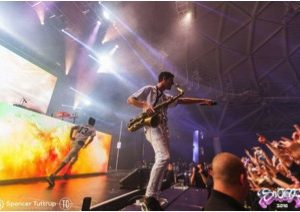 They have toured all throughout the United States and performed at Lollapalooza Brazil. In 2014, they collaborated with Electric Family, charitable fundraiser for impoverished areas throughout the U.S. 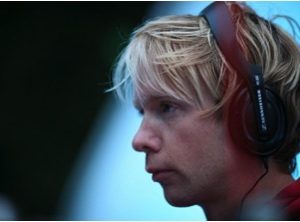 David Tipper, blend of electronica, breakbeat, glitch hop, trip hop, and ambient is memorable. is from Wimbledon, London. Tipper started in London night clubs as a teen and signed with Sony in the late 90’s. Once he dropped The Fuel Years, his career took off and ended up touring in Australia, Europe, and the states. In 2005, he created Tippermusic.net. The digital world emerged a new outlook for EDM artists because of Tipper.

It was my crowd. I felt comfortable. Everyone was respectful and it wasn’t hard to get anywhere. It was a very relaxing experience. Tipper’s visuals were a highlight to his set! I was in a trance the whole time!

Take Me Back to Snowta…

Snowta’s first year was an absolute success! Over 5,000 people had attended this event. It was a great way for our city to show support for our local artists. Aside from discovering artists, I finally got to see Tipper! It was a complete surprise attending this year! When I woke up, I was exhausted and hungover. It was one of the greatest experiences of my life. I’d like to thank my friends Connor, Hassan, Shane, and Walter for ending 2016 with a bang!

Fool's Paradise Line Up is Ready to FUNK YOU UP! [EXCLUSIVE LINE UP RELEASE]