Blunts and Blondes has been sweeping all over Facebook from his video mixing Excisions, The Paradox. From playing Life In Color Miami, at only 21 years old, he’s opened for household names like 12th Planet and Megadon. His talent is nothing short of perfection. This cat is most definitely a producer/DJ to watch in the following 12 months. Holding a residency at the Ritz in Florida, Blunts and Blondes is a force to be reckoned with and we are excited to have him with our EDM Daycare crew today.

Thank you for being with us. It’s not everyday you meet with someone as talented as yourself! What’s been going on? Thanks for having me! And thank you! I’ve had a lot going on lately with all these show announcements and music being finished up. School takes up a lot of time so that too.

You’ve recently released a bunch of dates in Florida! What are you looking forward to the most on this tour? I’m extremely excited for Okeechobee. That’s gonna be insane. But every city I’ve been to in Florida has a different vibe to it so it’s cool to experience different places and meet different people.

You fucking destroyed Life In Color Miami! The filth was sick! Was it your first time playing LIC? Tell us about it! That was my first time playing LIC. It was soooooo much more than I expected. I had an earlier time slot.Then, things worked out and my set was packed. It was crazy. I could hear the roar of the crowd over drops. There were moshpits bigger than I’ve ever seen. It was like I was living in a dream.

What was the best show you’ve ever played? There have been so many awesome shows, but I played a sunset music festival pre-party at the Ritz and that was insane. Everyone was going nuts. It was an overall awesome weekend.

Getting to know Blunts & Blondes 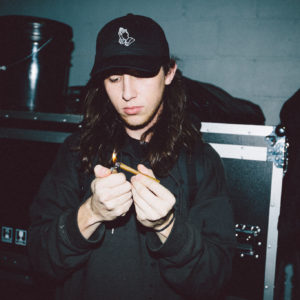 Being from Florida, do you find inspiration from your hometown and integrate it to your music? I really love Florida. The vibe is completely laid back that I’ve been raised in. I love the lakes, rivers, and beaches. I love chillin’ with homies, smoking blunts. Being in this kind of environment for the majority of my life, molded every single part of me. I guess in a sense, all of that made my music the way it is. I pull inspiration from anything and everything, so if I can give off the vibe that I fell in love with to other people, I’ve done my job.

What’s one of your pet peeves? When people ash on the rolling tray. Wtf is their problem?

Tell me something completely random? 47. Look it up.  RIP Capital Steez.

What’s your favorite thing you’ve mixed? I’m not sure I understand the question. I’ve played back to back with 12th planet and Megadon, that was pretty awesome.

If you can teach me one thing( it can be anything), what would you teach me? Find beauty in anything you can, and learn to appreciate it.

How legit is your “this drop is filthy” face? 2 legit.

Being 21 in the industry, what is the most challenging thing you face? Do you feel underestimated a lot? I haven’t really run into any problems with feeling underestimated. But I get “Are you supposed to be back here?” or the “How did you even get in the club” pretty often. But the most challenging thing being 21 is having all these responsibilities on my plate. Juggling school and music is pretty difficult. 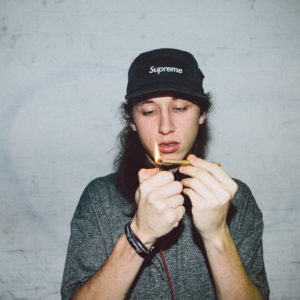 If you could choose a Super Squad to help you save the world from Robots, who would you choose and why? Easy. Skrillex and Snoop Dogg. Skrillex because we could just capture one of the robots, sample it, then make crazy futuristic apocalyptic dubstep. Then Snoop Dogg to supply the weed and I also really wanna smoke with Snoop Dogg. The world might still end, but at least I’ll still have weed and good music.

If there was a zombie apocalypse, what set would you play to defeat zombies? No set could defeat zombies, but some some Bassnectar would be cool to die to.

Do you have any new music coming out? Yes, I do actually. A new original and then a track with my homies Purge. its pretty awesome stuff I’m excited about it

What motivated you go get into music? I’ve always had an urge to create. So, after trials of trying, different things of music just stuck with me.

What’s important in a drop? The whole track is important. Every. Single. element.

Who would you like to collaborate with in the future? Boogie T. , Skrillex, RL Grime, Bassnectar, G Jones. Crazy dreams I know lol

Would you like to head bang with me sometime? I go hard, just warning you! lol sure whenever you want!

What festival are you dying to play? I would loveeeee to play Electric Forest

Who’d you like to thank today? My family, my best friend Taylor, my team Alex, Hope, and Terry. You guys mean everything to me.

Don’t Forget to follow Blunts & Blondes on all his socials below!

Camp and Chill? What I'm Looking Forward Nomading at MLUSA!